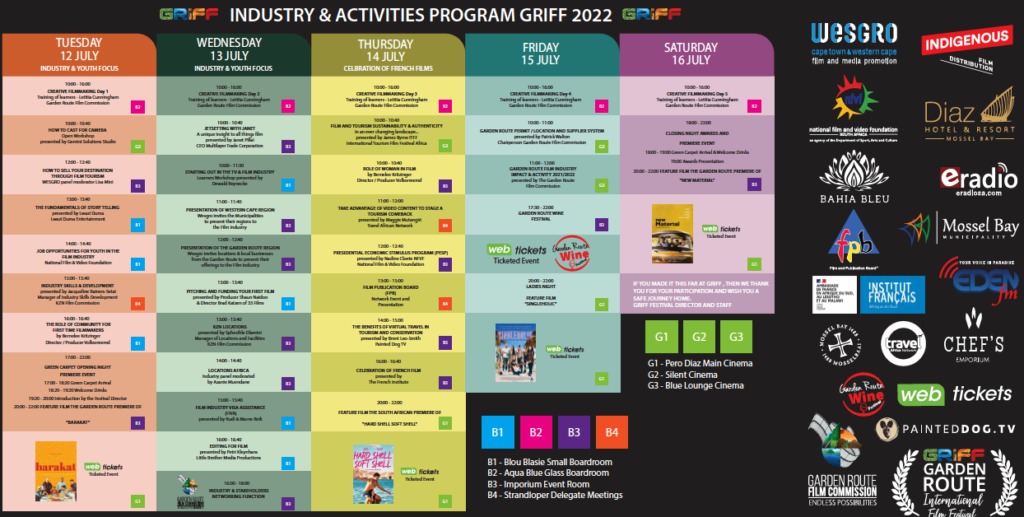 The Garden Route International Film Festival 2022 includes talks by industry leaders, on a range of topics relevant to anybody that is interested in the industry.

Bernelee is a recent graduate of film production at SAE Institute in Cape Town. By the age of 22, she has travelled to 5 continents and 22 countries – many of those expeditions done solo. After completing a 3-year Bachelor of Arts degree, she plans to move to Paris to pursue her master’s in film production in September 2022. Volksvreemd is her graduation project and first film.

Brad Katzen is an award-winning South African writer/director and co-founder of Johannesburg-based production company, 33 Films. Having worked with companies and industry professionals namely SABC, MNET, SANRAL and Disney to name a few, he has also
written and directed projects such as The Beginning (Cannes Film Festival screened), The Stick Up (SAFTA winner), Broken Vows (SAFTA winner) and Imbewu (SAFTA winner). With his first feature film, The Domestic (2022) exclusive to Amazon Prime, and his second
feature film in production with Netflix, Brad’s dedication to his craft has allowed him to cultivate a variety of other skills within the TV and film industry which includes
editing and post-production.

Topic: The benefits of virtual travel in tourism and conservation
Time: 14:00

Having grown up in the KwaZulu-Natal hinterland of South Africa, Brent Leo-Smith knew that a career in the bush was inevitable. He was home schooled at Phinda Game Reserve and, as a result, is a real “wild child.” He then tried his hand at studying law, but the bush called him back, resulting in six months in Zambia doing crocodile, significant game capture, and running game farms. Brent returned to his then home in Botswana and worked for his father at Kwando Safaris before moving to the Kruger National Park to take up a position as a guide at the Lebombo Concession. Later, he went to work at Londolozi Game Reserve as a guide and camp manager. In 2010, Brent began work in film production, both behind and in front of the camera, having featured on Animal Planet and Nat Geo Wild, where he presented over fifty episodes of the #SafariLive series. In 2019, he co-founded Painteddog TV, a technology-driven wildlife and conservation media company.

Topic: Staring out in the TV and Film industry
Time: 10 AM
Date: 13 JULY

Dewald Reynecke is an actor, dancer, tutor, director, choreographer, writer, MC, and motivational speaker, who received drama & dance training at Pretoria Technicon (TUT). Best known for his starring role as Jaco Geldenhuys on the e.tv soap opera Scandal, and as the male lead role Abel Wolfaardt, a serial killer, in the movie Wolf Wolf. This was his favourite character to portray so far in his career.

Manager of Industry Skills development at the KwaZulu-Natal Film Commission

Jacqueline is the manager of Industry Skills development at the KwaZulu-Natal Film Commission, South Africa. She oversees the implementation of varied training programmes from a Bursaries scheme, skills training in scriptwriting, camera, production, and drone training, and a-soon-to-be accredited 1-year intensive in HOD training on a production lot in the KZN province, among other programmes.

James Byrne is the co-founding festival director of the International Tourism Film Festival Africa.
Having partnered with Caroline Ungersbock in 2017, this developed into a collaboration between the old and the new.
Dynamic, resourceful and committed to facilitating the sustainable development of both the film and tourism industries, James’ main focus rests on bringing the next generation to the fore of the conversation, that is Africa.

Janet Pillai is the CEO and Founder of Multilayer Trade Corporation, (MLT Corp) a company that offers a seamless vehicle hire, shuttle and accommodation solution from inception to completion in the public, private corporate, tourist and maritime sectors.
Janet Pillai is active on the speaking circuit handling topics such as Transport, Tourism, Culture and Heritage, Oil and Gas and Women’s development and mentorship.

Jordin Naude, only child, raised in Mossel Bay. She got her first big role as Emma Komoetie Jr in the well-known South African Film, “Fiela se Kind” in 2019.

Director at Garden Route Film Commission and owner of Eden-Shine Christian School Gr-R to Grade 12. With years of experience in the facilitation of staff development, youth development and gender skills development workshops and also lead facilitator presented at GRIFF 2022. BA in Psychology and Communication Science tishacunn@gmail.com

Lwazi Duma is a self-made filmmaker who grew up in the rural village of Umgangeni South Coast of Durban. He has been doing short films for more than ten years .Lwazi made his mark in 2018 when his short film that was produced in Mpumalanga got nominated for best film at the African Emerging Filmmakers Awards.

Maggie has over 16 years of experience working in the travel/tourism industry; Her career in the industry saw her travel to some of the most sought-after destinations in Africa and fuelled the next chapter of her life: sharing Africa with the world through Africa’s first international broadcast and OTT streaming TV channel. Travel Africa Network is a global broadcast travel TV channel that broadcasts content to 135 million households and luxury hotels in Western Europe, Eastern Europe, the Middle East, and North Africa on EUTELSAT’s HOTBIRD 13° East which forms one of the giant satellite broadcasting footprints in EMEA. The Free-To-Air, 24-hour travel TV channel covers African gastronomy, conservation, art, culture, luxury and adventure travel, hotels, lodges, destinations, etc. Travel Africa Network’s tech division incorporates Virtual-Reality and Augmented Reality technologies to provide unique interactive experiences that promote regional and regional consumer engagement.

Producing credits include both local and international work including commercial, documentary, TV, reality TV. He is a driven and motivated producer, dedicated to the
growth, sustained development, and efficacy of the industry. A member for the International Academy of Television, Arts and Sciences (Emmy’s), Patrick’s connection and commitment to the film, commercial and television production industry is a real benefit for his clients.

Petri has been in the industry for more than 15 years. As an editor and producer, he has had more than 100 screen credits behind his name, having worked for top-end broadcast productions like 50|50 and Carte Blanche for 6+ years. His experience includes having worked on Documentary films, feature films and he still to this day do freelance work as an online editor and colourist.

Founder of Johannesburg-based film production company, 33 Films, Shaun Naidoo is an award-winning South African producer, who aims to uplift the youth and impact South
Africans with a message of hope for their future. Shaun has produced various projects such as The Beginning (2015) made an appearance at the Cannes Film Festival, The Stick Up (2017) which is a SAFTA (South African Film and Television Award) recipient and The Domestic (2022) as his first feature length film, with a Netflix film currently in production.

Sphesihle Dlamini started off as a film director for a number of Mnet and Etv productions then later moved to being a Location and Facilities specialist at the KZNFC. She has facilitated many subsequent productions through the KZN Film Commission including big SA productions such as Uzalo, Imbewu, Keeping up with the Kandasamy’s, The Queen, The River, FIAP Congress, some NetFlix productions and many more.

Zoe Tiche Fortuin got her first role in South African Movie “Hart in die Bos” which was filmed at various locations in the Mossel Bay area.